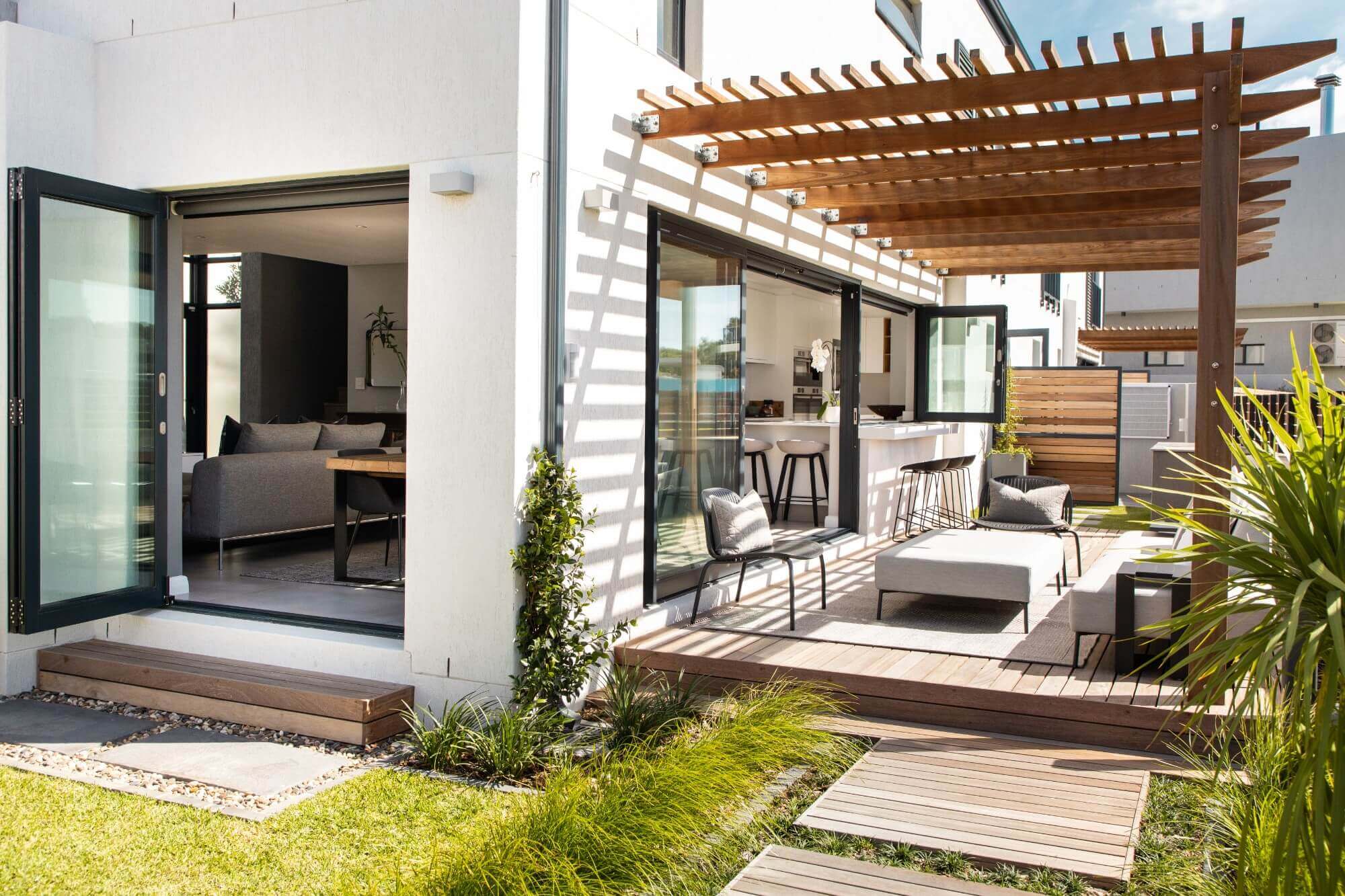 A residential estate is a strange thing. First it’s a piece of land, then a plan and marketing concept, then a construction site, then a bunch of empty buildings. But, at some almost mystical stage, that construction site becomes houses, those houses become homes, and those homes form a community. But what an adventure to be the first to move into an empty estate! Or the first to put your name on a nebulous list, committing to buying into not even a concept – a dream.

We chatted to some of the first residents in the newly launched Rondebosch Oval lifestyle development to find out, and discovered that it can be pretty darn scary. But also awesomely rewarding.

Debbie and Graham Radford, and their son Jaden, were the first residents to move in, so they’ve watched every subsequent house become occupied (only four so far).

They’d sold their Bryanston home two years before, trekked to Cape Town for business purposes, and moved into a rental property in the city while they looked for a place to buy. This, they figured, would take a few months.

Firstly, you struggle to sell a Bryanston property, and expect to buy a similar sized property in Cape Town with the proceeds. So they sensibly set a budget, and started looking. And looking, and looking, and looking! And, when they found out about Rondebosch Oval, they almost decided not to look at it because they didn’t want to be tempted to go over their budget. Well, they were. And they did, but they most certainly do not regret it.

Debbie and Graham have bought quite a few properties before – including off-plan – so they’re aware of some of the pitfalls, and they had a very good idea of exactly what they wanted. ‘We looked at the available interior schemes,’ Debbie says, but ‘we ended up choosing most of our own finishes.’

They also made a few layout changes but, she says, Rawson were amazing. ‘Their go-to response was “no problem, leave it with me,” or, in a worst-case scenario, “That may be tricky; we’ll have to figure it out and get back to you.” And, invariably, they did. I can’t think of a single thing we wanted that we ultimately didn’t get,’ she says.

So, while it’s very different to what they’re used to, it’s all about attitude, Debbie explains. Rather than thinking of it as downsizing, she says, it’s right-sizing – all based on the concept of mini-mansions. A mini-mansion, she explains, is a mediumsized house that is superbly appointed with gorgeous finishes, and all the mod cons. It was a conscious decision on their part to ‘have less space, but make it exactly what we want – the best we can possibly do with a) a budget, and b) the space available.’ They have less stuff now and, Debbie says, it’s as if a weight has been lifted off her shoulders. ‘We have what we love, and what we need.’ And no more.

When the development was first mooted back in 2010, Ravi and Deepa Jaga were among the first people to sign up. But the Rondebosch Oval is a unique development on an iconic property with a long history, and bucket-loads of emotional associations with generations of cricket-playing and cricket-loving Capetonians, so it took – literally – years for the developers to negotiate all the necessary hurdles before the first spade could be turned.

‘We almost gave up several times,’ Ravi admits, ‘but there’s nothing quite like this anywhere in the Southern Suburbs, especially in the Rondebosch area. The safe, relaxed and neighbourly lifestyle the estate offers is growing on us second to none, and we are loving it.’

The original plan was to develop a high-density estate with some townhouses and a few apartment blocks with – ultimately – about 250 apartments and homes. But, after a number of redesigns, it was reduced to a mere 41 homes, all clustered around the cricket ground. In one sense, the delays were a blessing in disguise (except the price increases of course!), Ravi says, as it is a much more spacious and appealing development now than the original concept envisaged.

‘We were lucky enough to have one of the first choices when we were choosing our home in the estate,’ Deepa says. ‘We chose a corner plot right on the Oval, which luckily afforded us some extra outdoor living space, looking out onto some lovely trees and the mountains – it all suddenly became real.’ But even then, as building goes, it wasn’t all plain sailing. Ravi says laughingly, ‘we were the guinea pigs – in terms of the contracting and many other aspects. Let’s just say that we may have proposed a few changes!

‘Rawson encouraged us to be as involved in the project as possible,’ Deepa says. ‘We were on site nearly every day, checking that things were going as planned and, occasionally, making the odd change on the fly.’ Both Ravi and Deepa emphasised how incredibly helpful and accommodating Rawson were to their every requirement.

They have a great view of the Oval, so they’ll have ‘grandstand’ seats when matches start there later this year – through the temporary nets that will be erected to protect the houses (and residents) from errant sixes.

When they originally put their names down for the estate, their twins, Diya and Rish, were toddlers, but now they are active, fun-loving 11-year-olds who have the run of the estate with their good friend and neighbour Jaden. If they’re not playing with Roxy the dog on the field, they’re riding their bikes or swimming at the clubhouse – and Deepa has a great view of the clubhouse and the pool from both upstairs and downstairs, so she keeps a casual eye on them, confident that they are safe and secure. And, of course, they both love the fact that their commute to school is super-short, as the kids’ schools are close to the estate. When they’re older, they’ll probably walk to school.

Lindy and Geoff Brien have much younger children than their neighbours, and this is the first home they are buying. Geoff, who was pipped at the post by Ravi, was the second person to put his name down for a unit – back in the day.

And, here’s the crazy thing: he was single at the time, but he knew he wanted a safe, secure place to bring up the family he was – at that stage – just dreaming about, and he was determined to not be the kind of dad who gets home from work after the kids are in bed. So it was the location and the super-quick commute that attracted him. And, while the interminable red tape carried on, he resisted the temptation to buy another home, and rather bought investment properties – specifically student houses.

And then – sadly – they realised that the nice affordable four-bed apartment that Geoff had signed up for before he’d even met Lindy had morphed into a house with a significantly more impressive price tag. But they specifically wanted the security of an estate, and Geoff still had the dream of being the dad who was there at bath time, so they opted for three bedrooms, did some scrimping and some rebonding of investment properties, and committed.

They were the third family to move in, and pretty rapidly found firm friends in Debbie, Graham, Ravi and Deepa, and David often hangs out with Jaden, Rish and Diya, even though they’re significantly older. But – hey – the community is growing. Debbie and Graham were the sole residents for over a month. Then there were two, then three, and now there are five. Another three or four families are set to move in any day, and more will follow, so soon there will be younger children.

And it’s that community that Lindy loves so much – that, and the fact that her life is all of a sudden easier. Before, if she wanted to go to gym, or go for a swim, or even go out for a quick coffee, it was a mission – kids, car, traffic, the whole thing. Now she just strolls out of the door when the mood takes her, and heads off to the on-site gym, pool or coffee shop. As she works mostly from home, she gets the full advantage of the lovely surroundings, and she can be a hands-on mom while the kids are young enough to need and appreciate that.

It’s clear that all the residents we spoke to love living at the Oval, and believe it was worth the wait, but Diya, Rish and Jaden didn’t have time to tell us how they feel about living there. We got a quick polite greeting from them before they dashed off to the pool, and then another quick goodbye before they dried off and went to play with Roxy on the Oval. And that – really – says it all.