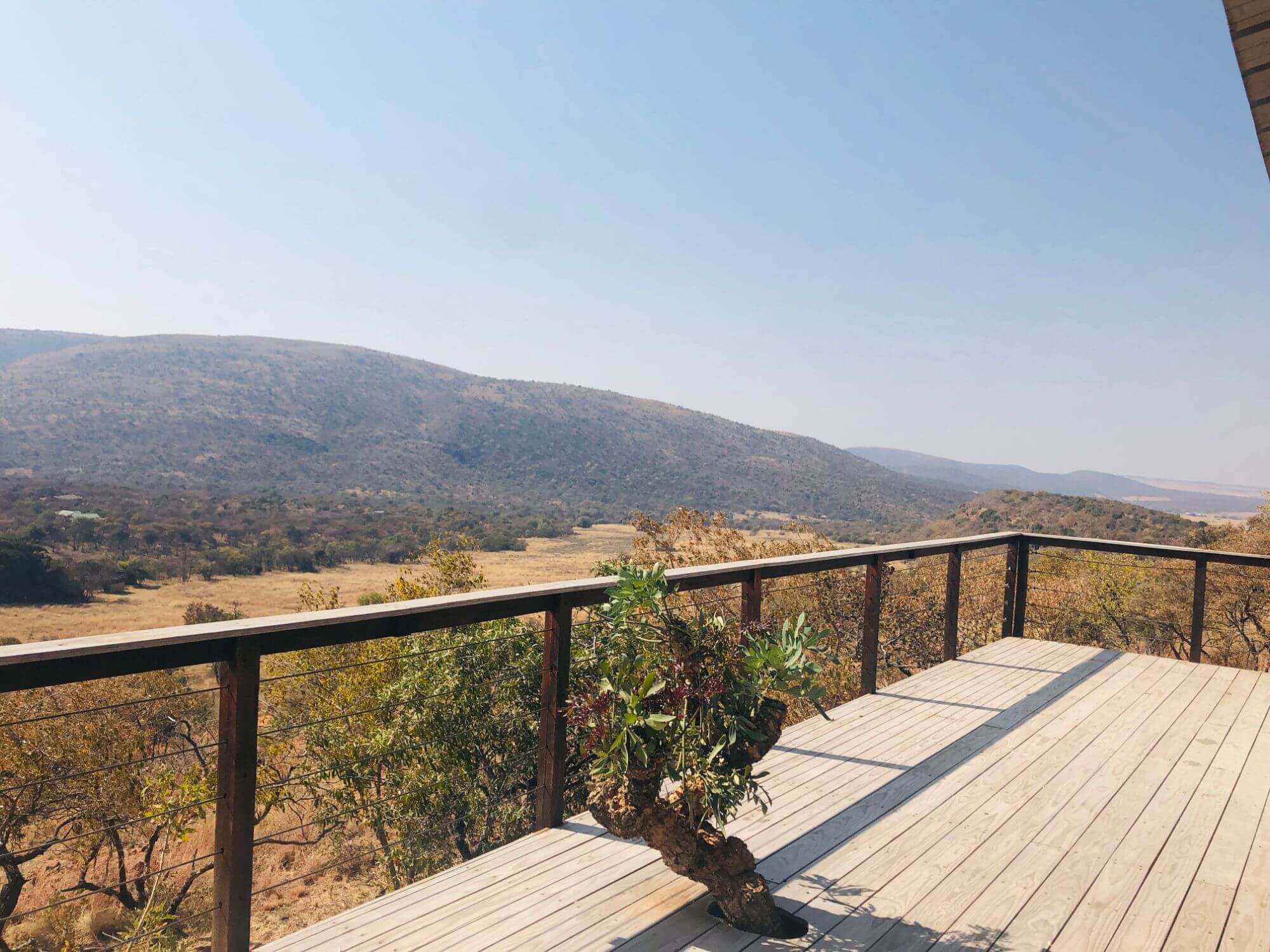 In the bush, and off the grid

In the bush, and off the grid

A unique 1,500-hectare bush retreat in the Waterberg, only an hour and a half from Pretoria and two hours from Johannesburg, Boschhoek Mountain Estate offers residents a sanctuary away from the hustle and bustle of Gauteng city life – and offers management some unusual opportunities.

Boschhoek Mountain Estate was developed as a joint venture by Herbert Smith and the landowner, cattle farmer Chris Klingenberg. When they first started in 2007, there were gorgeous mountains but miles of fences, herds of cattle and only a couple of jeep tracks. The fences were removed, the cattle relocated, and the roads repurposed for use by estate residents and management.

Passionate about the bush and with extensive experience in the town planning and property development arena, Herbert had long dreamed of developing an estate that was not about ‘the golf courses and three-storey clubhouses and the like. It’s really about the bush. Our typical owners are professional guys who would like to go and sit on their backsides on a rock and enjoy nature around them.’

It wasn’t plain sailing. Obtaining all the required approvals, from EIAs to water usage and licences, was a long process that took more than four years. By 2011 they were ready to start marketing. They were selling a dream, as there were still cows behind barbed wire fences, and no infrastructure. Fortunately, the unrivalled beauty of Boschhoek’s mountains, streams and bush sold itself. By 2013 they had sold more than 50 of the 143 one- to two-hectare full title stands and could proceed with the initial batch of transfers.

What made Boschhoek’s sales easier is that there is no minimum building size, and no specified house plans or builder. Tented lodges are also allowed. There is a maximum building size of 500 square metres, and buildings have to blend in with the bush. A control architect oversees building plans. In addition, the building’s footprint needs to be approved by an ecologist.

The owners have 10 years from date of transfer to start building, and a year after starting to complete the building process. All this makes for a great opportunity to own a piece of paradise for both holiday home owners and permanent residents – about 10% of current owners live on the estate permanently and the number is steadily growing. So far around 60 homes have been built on the 116 stands (80%) that have to date been sold, with bush homes varying from a small bush pad for two through to multimillion rand lodges beautifully blending with nature. The final phase has been launched, offering some stunning bush properties at R849,000 to R1,499,000. There is also a down-to-earth clubhouse with a farm-style swimming pool.

In terms of bush development, legislation called the Development Facilitation Act – a parallel piece of legislation but different to the normal Provincial Ordinances – was used to establish Boschhoek. It was the only way to establish a full title bush estate as this legislation enabled them to deal with the Department of Agriculture’s opposition to the subdivision of agricultural land. This legislation has since been removed from the law books, meaning that the current supply of available bush stands will be the last, while the demand is continually escalating. This results in a substantial increase in investment value and growth.

Boschhoek Mountain Estate also offers a fractional ownership investment – one of the stands was developed into a stunning 12-sleeper bush lodge with 10 shares at R 350,00 per share, only a couple of which are still available. Every shareholder has a week every two months (10 weeks). With the use roster working on a 50-week cycle, it moves forward every year, giving each owner a turn to occupy during peak holiday periods.

There is a variety of landscapes on the estate, including savanna, mountains, bushveld, a mountain stream and dams, and, with an altitude difference of about 300 metres, there is a distinct change in vegetation from proteas up on the mountain to grassland down on the savanna, and bushveld in between. Herbert tells us that the land was fairly untouched, except for the 10% of savanna that was probably agricultural farmland at some point. One of their first priorities was to develop an environmental management plan for the estate specifying a conservative maximum game carrying capacity – particularly useful in years of drought.

‘We brought wildlife back in, changing things back to nature. By bringing back all the major nature components and having people share in it in a limited and responsible way, we have seen how nature responds by bringing back all the other little things. We brought in giraffe, kudu and waterbuck, red hartebeest, impala and everything that occurred here naturally except for the dangerous animals like buffalo and rhino.’

It is amazing to realise that once all the houses on Boschhoek are built, only around 0.25% of the estate will be under roof. The rest belongs to nature.
Camera traps now show evidence of civets, aardvark, porcupine, genets and other small game, and there are small existing brown hyena and leopard populations on the farm. The estate manager, Jandre Higgo, grew up on a farm and is a qualified FGASA nature guide, so he is well suited to managing an estate of this nature. His can-do attitude combined with the estate’s ethos of ’n boer maak ’n plan (a farmer makes a plan) makes the day-to-day activities of game management, fence repairs, road maintenance, checking water pipes and supplies, and cutting fire breaks in winter a breeze.

Herbert explains that sustainability is key to the operations of the estate. Potable water is supplied from the estate’s own boreholes and distributed through an engineer-designed reticulation network to every stand. Boschhoek uses only a fraction of the available underground water supply.

Wastewater is fed through a system of grey-water irrigation points and eco-friendly gravel beds. From an electricity point of view, they took the decision to go for solar and gas instead of an Eskom connection – except for the clubhouse, workshops, and one borehole, which are for the time being still connected to Eskom.

The houses are all off the grid, with load shedding and electricity accounts being something from another world. Most home owners prefer solar and batteries, while some want to feel the bush vibe of paraffin lamps and firelight, with perhaps a small solar system for charging cell phones, etc. It’s all up to the home owner’s preference and pocket. In keeping with people’s desire for technology, most of Boschhoek has good cellular signal, and where it doesn’t, an inexpensive satellite link is possible.

‘Having our own water and electricity supply makes us pretty self-sufficient. With a monthly levy of around R1,000, property rates of around R12 per month, no electricity accounts and free basic water provision, one can live here for just over R1,000 per month,’ says Herbert.

‘Maintaining economic sustainability is crucial, with a need to keep levies as low as possible, especially as these are mostly second properties.’ To do this, Jandre has been empowered to run his own business as well as handling additional maintenance tasks for owners in conjunction with being estate manager.

This keeps the costs down for the estate. They also use the resources on the estate to generate income, such as selling off excess game, cutting, baling and selling the grass on the savanna portion of the land, and selling firewood. This income goes into the levy kitty and goes a long way to keep levies low.

‘The property has been a farm since the 1880s and has been supporting families for more than 100 years, so there’s no reason it cannot continue to do this into the future,’ says Herbert.

From a management perspective, Herbert explains that the homeowners association was handed over to home owners within three months of the first property transfer.
The board and HOA make decisions for the estate, he explained, but added: ‘I do keep an eye out, but it’s important to me that owners take control of the estate. We’ve essentially gathered a bunch of people here who are fairly like-minded, who absolutely love the bush and who buy into the minimalistic and rustic concept that is Boschhoek while giving owners the choice of a tiny bush retreat or an expansive lodge. Boschhoek is a place where families reunite, where a grandfather shows his grandson the ant lion in the sand. It is also a place where we, our children and our children’s children may find reality and healing, as well as meaning in a world that increasingly buries itself in layer upon layer of make-believe. There is realness in the tracks under the dappled shade of a wild syringa tree, which no smart phone, pod or pad could ever aspire to touch. At Boschhoek we strive for reality and essence, a back-to-nature approach as opposed to the “glitz and glamour” often found elsewhere in the bush.’

Herbert’s commitment to Boschhoek doesn’t only stem from his role as developer – his passion for the bush is also visible in his own lovely rustic bush abode built on stilts overlooking a dam and the mountains. ‘I’ll grow old here,’ he says with a smile., a back-to-nature approach as opposed to the “glitz&glamour” often committed in the bush elsewhere.”

Enquire about this Estate 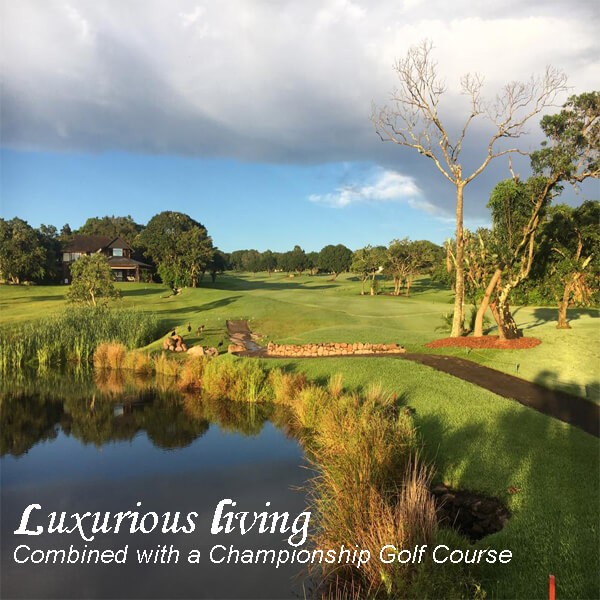 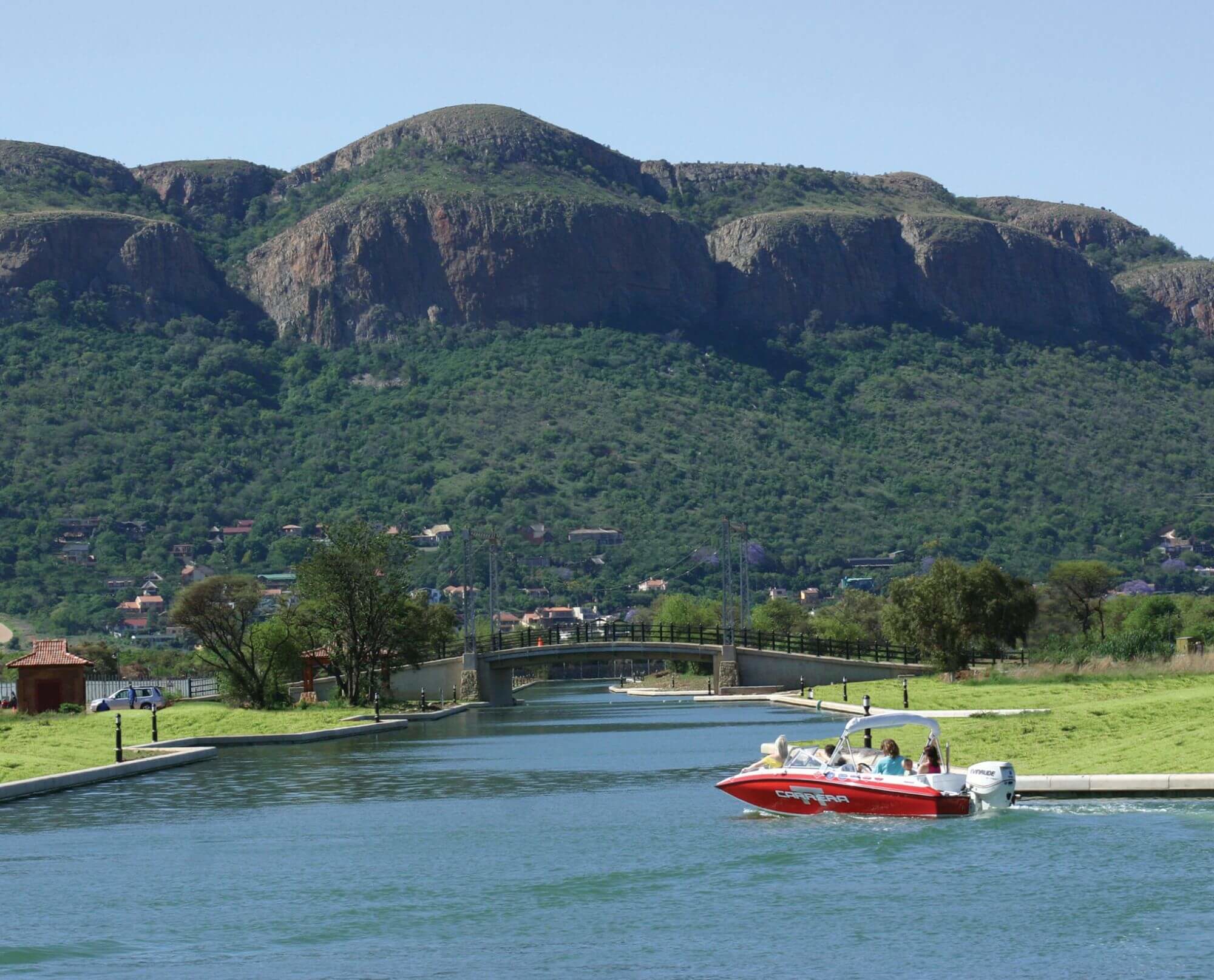 6 min readThe Islands is a revelation for those who equate Hartbeespoort and its surrounds with golfing – it’s a slice of European-style marina living. 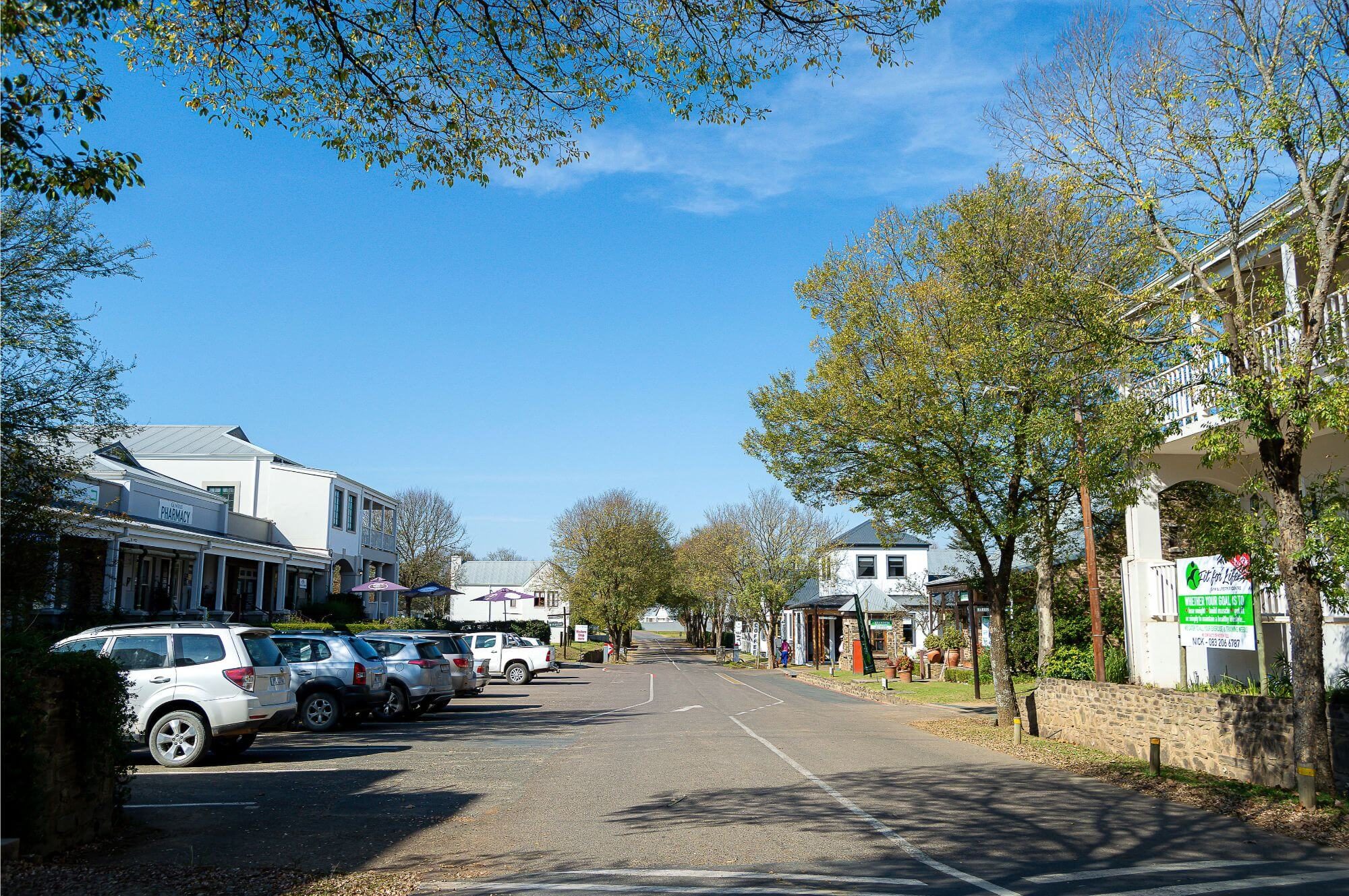 6 min readGowrie Village in the KwaZulu-Natal Midlands is the quintessential country community, integrated into the greater village of Nottingham Road. Established in 2002, Gowrie’s sense of relaxed rural spaces and neighbourliness are key to the success of this mixed-use estate.

Managing Marina Martinique for its community

6 min readWhich processes, procedures, and best practices keep a successful older estate at the top of its game? Marina Martinique – a unique Cape-Caribbean-style estate consisting of 384 residential stands and 475 units in group housing developments – is built around a lake and seven kilometres of constructed canals that lie three metres above sea level, and whose water is pumped in from, and flows back into, the ocean. 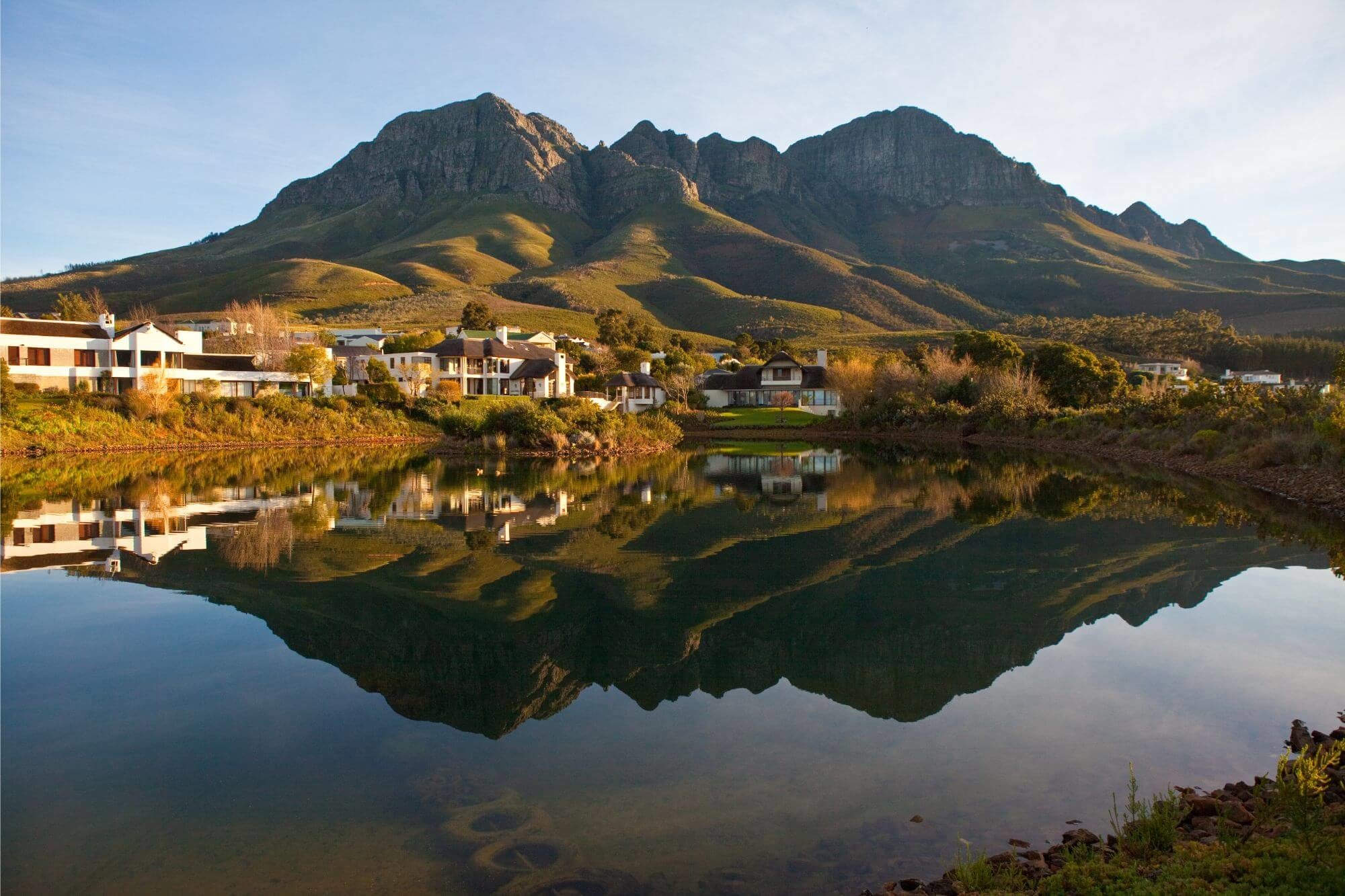 6 min readOn the slopes of the Helderberg Mountain in Somerset West, the prestigious Erinvale Country Estate and Golf Club, which will be celebrating 25 successful years in 2020, was one of the first residential golf estates in South Africa. To find out what the ingredients are for this success, we chat to Kerstin Dinklage, Erinvale HOA trustee responsible for marketing and communication.